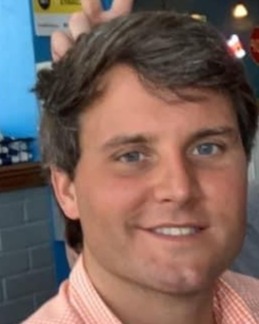 Jordan Taylor Hale was born June 13, 1989, in Nashville, Tennessee to Stewart Hale and Jackie Plant Boswell. He departed from this earthly life at the age of 33 on October 14, 2022, while residing in Brentwood, Tennessee. Jordan graduated from John Overton High School as an international baccalaureate student and scholar athlete. In his position as starting quarterback at Overton, he won the National Football Foundation and College Hall of Fame Scholar Athlete Award and the Davidson County Hume Award for Academic Achievement. Jordan then enrolled at the University of Tennessee – Knoxville where he graduated from the Haslam College of Business with a Double Major in Finance and Marketing with a Collateral in Entrepreneurship in 2012. He is remembered for his devotion to family and friends, his dedication to his younger brothers, and his deep passion for God and Vols football. (We feel strongly that he had some involvement in their win over Alabama!) While working on his own recovery, Jordan was dedicated to helping and mentoring others in their recovery from addiction, most recently working for the Hope Center and Spero Health. So many stories have emerged from friends and complete strangers who Jordan helped along the way. He had a heart of gold and was loved by so, so many.

Jordan is survived by his mother and step-father, Jackie Plant Boswell and Keith; his father and step-mother, Stewart Hale and Cindy Faith; his brothers, with whom he was so proud, Jake Hale and Jaxon Boswell; step-brother, Nathan Boswell; grandmother, Emma Dean Hale; grandfather, Wayne Plant (whom passed on 10/19); his very special friend, Kayla Stirling; his rescue dog Rocky; his “Aunt Jan” Nelson; uncle, Scott Hale; cousins, Brooke Cole, Mark Cole, and Bailey Nelson; along with an extended family that shared his love. Jordan was preceded in death by his grandmother, Charlotte Plant; and grandfather, Alan Hale.

We would like to give special thanks to his friends, who have become family, from the Hope Centers in Springfield, TN and Axton, VA.

Funeral Services for Jordan will be held at Compassion Church in Waverly, Tennessee on Saturday, October 29, 2022. Visitation will begin at 12:00pm until service time at 2:00pm. Burial will be at Plant Box Cemetery on Highway 70 in New Johnsonville, Tennessee following the services.

In lieu of flowers, the family requests that donations be made to The Hope Center (www.Hopecm.com) or Brown Dog Coalition & Rescue (www.browndogcoalition.com/donate) in his memory.