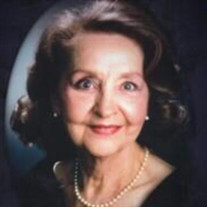 Marjorie Jeanne Van Der Veer passed away on July 28, 2020 at the age of 97 ½. Born January 29, 1923 in Toledo, Ohio, Marjorie was known for her cheerful personality, kind demeanor, and great sense of humor. Marjorie attended Jones Junior High, Scott High School, and studied “retail sales” at Toledo Vocational. Marjorie obtained a position as a floral arranger, working for the largest florist in Toledo, Max Zeller. In addition, she held a second job at the Lakeside Biscuit Company. When World War II began, Marjorie signed up to become a WAVE, but was not able to serve, as she was considered too young. Still wanting to contribute to our country, Marjorie relocated to Fort Wayne, Indiana and was given a challenging position as “Rosie the Riveter”, assembling plane motors for our military. Always ambitious, Marjorie also worked as the dining room hostess for the finest hotel in Fort Wayne. It was there that she met her husband of 46 years, Gaylord Murray Van Der Veer. The two married in 1945 and honeymooned in New York City. Marjorie was a very talented vocalist singing for many churches around the country, and at one point was the featured vocalist for the Billy Graham crusade. Additionally, she directed the singing in several of the churches she attended. Gaylord’s employment with the Ford Motor Company enabled the couple extensive travel and the ability to reside in numerous states. When daughter Vanessa attended college in Nashville, the couple purchased a farm in Bon Aqua, Tennessee which immediately became home. Marjorie was involved in charitable work throughout her life. She collected and served on the Board for the Dickson Cancer Society and filled the position of secretary. She headed up the program “Love Lights a Tree” and worked at the Dickson Help Center. She served as a steward on the board of the Dickson First Church of the Nazarene and was Chairperson of the Honey Tree Daycare. For many years, Marjorie and her daughters would make it a weekly practice to visit patients in several of the local nursing homes, always bringing roses out of her garden. Marjorie’s colorful life included many interests. She was a wonderful homemaker and cook. She received numerous baking awards, one of which included a first-place award selected out of hundred of participants in a pumpkin pie baking contest sponsored by Wal-Mart. Additionally, she obtained a multitude of blue ribbons from baking contests and fairs throughout the country. Marjorie was an experienced hunter, loved to freshwater and deep-sea fish, and participated in many outdoor sports and activities. In early years, Marjorie and Gaylord raised registered Palominos in Union, Kentucky. She was an accomplished equestrian and enjoyed going on moonlight rides with the family. The Cincinnati Enquire dedicated an entire section of the newspaper highlighting Marjorie, Greg, Sandra, and Jeannine with their horses. At one point, the family owned and cared for seventy palominos. Another endeavor was breeding and training thoroughbred racehorses, several of which raced at Churchill Downs on Derby Day. Marjorie also modeled professionally for several large department stores in Ohio and Kentucky. Whenever she was extended a compliment her typical response was “Pretty is, as Pretty Does.” For many years, Gaylord and Marjorie promoted Gospel Music throughout the United States. Most of all, Marjorie was a person of strong faith. She was a caregiver for many, helped, volunteered, and befriended anyone in need. She was a remarkable person and will be truly missed. Her many loved ones include: her husband of 46 years, Gaylord Murray Van Der Veer (deceased); children: Vanessa Morrison Van Der Veer, Gregory Lee Van Der Veer, Sandra Dillard Myatt (deceased), Jeannine Van Der Veer McMurtry (deceased); grandchildren: McKensie Jean Morrison, Will Cummins (Amber) Morrison IV – better known as Bo, Todd Van Der Veer (Cari) McMurtry, Quinn Van Der Veer (Renee’) McMurtry, Randolph William Dillard (deceased); sister, Emma LaVonne Dusseau (deceased); niece, Ranata Dusseau Cappelletti; nephew, Kenneth E. Van Der Veer (deceased); and extended family: David Rymer, Zachary Thornton, Julie Grandy, Susan Bannister, and Justin Oliphant. Private graveside services were held on August 05, 2020, at Union Cemetery in Dickson, TN Arrangements by Spann Funeral Home

The family of Marjorie Jeanne Van Der Veer created this Life Tributes page to make it easy to share your memories.