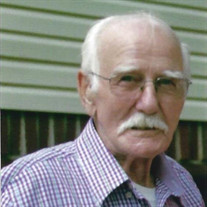 Lyle “Pop” Laugen, 93 Lyle Laugen, a former resident of Fergus Falls, MN died March 5th at 11:00 AM in his home in McEwen, TN. He was 93. Mr. Laugen was born Jan 22, 1928. He was among the youngest of WW2 veterans, having enlisted in the Navy in 1945 at age 17. He saw action in the Pacific at the Battle of Okinawa and witnessed the sinking of the Japanese Battleship Yamato. He also participated in the Battle of the Malacca Strait. In 1950, Laugen enlisted to fight in the Korean War with the 11th Airborne Division from Fort Campbell. He rose to the rank of SGT before being wounded and left for dead on the battle field for several hours. In 1955-56 he was a member of the 187th Infantry Regiment known as Rakkasans, also from Fort Campbell. SGT Laugen received several accommodations during his career for valor and bravery, including to the Purple Heart. “Pop” as he was affectionately known by his family, is survived by his wife of 18 years, Mary Stokes Laugen; 3 step children: David Stokes, Tracey Stokes Bullard, and William Stokes; and eight grandchildren, Jordon Stokes, Carly Stokes, Isaac Bullard, Hannah Bullard, Sarah Bullard, Henry Bullard, Drew Swearns and Rebecca Swearns; and 7 Great Grand Children: Jena Stokes, Sophie Grace Stokes, Scarlet Stokes, Max Stokes, Addie Swearns, Collin Swearns and Annie Swearns. Mr. Laugen is also survived by his sister, Ruby Christianson. A private Memorial Service is planned for Lyle Laugen on March 28, 2021. Arrangements by Humphreys County Funeral Home (931) 296-5955

The family of Lyle Willis Laugen created this Life Tributes page to make it easy to share your memories.

Send flowers to the Laugen family.