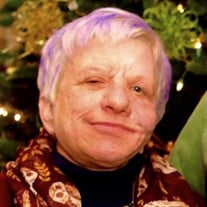 KELLEEN “KELLY” JANA WILSON Kelleen “Kelly” Jana (née Crawford) Wilson of Waverly, Tennessee passed away peacefully on March 25, 2021 at the age of 64. Kelly was born on November 4, 1956 in Santa Clara, California to Mary Madeline and Francis “Buck” Crawford. After graduating from Live Oak High School, she spent over two decades living in Baton Rouge, Louisiana, where she met and married her husband, John Stanley “Stan” Wilson. Though she considered Louisiana’s climate as “Dante’s third ring of hell” – a combination of heat, humidity, and hurricanes, she adopted a love for Louisiana cuisine. In turn, she developed a special talent for cooking that she shared with her neighbors and friends. Kelly was a lover of huskies and malamutes. She adopted 6 over her lifetime and considered them her children or “fur babies.” In 2012, she and her husband relocated to Waverly, Tennessee, where she became well known for her colorful hair. She is survived by her husband, Stan; mother, Mary; sister, Erin (Terry); brother, Colin (Kimberly); husband’s children, Jason and Carrie; nephews, Jonathan, Jackson; and nieces, Kimberly, Kahlia, and Kylarie. She is preceded in death by father, Buck; and brother, Kevin. In lieu of a memorial, please give to St. Jude research. Kelly’s oldest brother died from leukemia in 1960 at the age of 5. He was ever on her heart. Arrangements by Humphreys County Funeral Home, (931) 296-5955

The family of Kelleen "Kelly" Jana Wilson created this Life Tributes page to make it easy to share your memories.

Send flowers to the Wilson family.