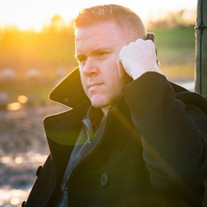 Joshua Andrew Hayes of New York, NY; formerly of Dickson, TN, passed away on Friday, September 11, 2020, at the age of 43. He was born in Nashville, TN on September 07, 1977, to Thomas, and Linda Peeler Hayes. Joshua graduated DCHS in 1995 and continued his education at the University of Missouri where he obtained his Bachelor of Journalism with an emphasis on advertising in 1999. Following his graduation from college, he began work in St. Louis, MO at Zipatoni (1999 – 2003), then at Moosylvania (2003 – 2008). Following St. Louis he began work in Louisville, KY at Brown Forman (2008 – 2011), until accepting a position in New York City, NY at Pernor Ricard (2012 – 2015). Joshua then began work at William Grant & Sons as a Senior Brand Manager (2015 – present). He had a passion for music and the arts. Joshua lived life to the fullest. He is survived by his Mother Linda Peeler Hayes of Dickson, TN; Sister Abigail McClure (Dr. Daniel McClure) of Dickson; Nephews Tristen Andrew, and Jasper Thomas McClure; Niece Madeline Kathleen McClure; Uncles Keith Hayes of Lobelville, TN and Ty Hayes of Charlotte, TN; as well as his Aunt Nancy Conley of Dickson, TN. Joshua was preceded in death by his Father Thomas Hayes; Nephew Goff Alan McClure; Grandparents Roy Thomas, Elizabeth Peeler, and Kathleen Hayes Chunn; Uncles John Thomas Peeler, Garry Peeler, and James Michael Hayes. Visitation will begin on Friday, September 18, 2020, from 3 – 8 PM and will continue on Saturday, September 19, 2020, from 10:00 – 12:00 PM at Spann Funeral Home. Funeral services will begin at 1:00 PM on Saturday, September 19, 2020, from Walnut Street Church of Christ with Bro. George Caudill and Judge Michael Meise officiating. Interment will follow at the Union Cemetery. In lieu of flowers, a donation may be made to Fight DMD or USO. Arrangements by Spann Funeral Home & Cremation Services.

Joshua Andrew Hayes of New York, NY; formerly of Dickson, TN, passed away on Friday, September 11, 2020, at the age of 43. He was born in Nashville, TN on September 07, 1977, to Thomas, and Linda Peeler Hayes. Joshua graduated DCHS in 1995... View Obituary & Service Information

The family of Joshua Andrew Hayes created this Life Tributes page to make it easy to share your memories.

Send flowers to the Hayes family.