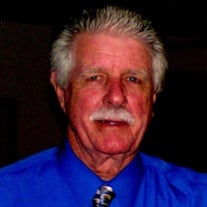 James Delbert Glass was a quirky, eccentric, big-hearted man, who never met a stranger. He passed away on April 18, 2021 from an extended illness at his home surrounded by his family. James D. Glass was born in Dickson on March 16, 1934 to Vernon and Ada Clifton Glass. He attended school at the Herbison schoolhouse. He was self-employed. Throughout the years, he owned Glass’s Grocery Store, Auto G. Clinic Repair Shop, and Junkyard and part-owner of G&G Land Development. He dappled in everything from real estate to collecting rare and unusual items such as fiddles, guitars, cast iron skillets, smoking pipes, cookie jars, salt and pepper shakers, angels, and music boxes to name a few. He was musically inclined and played the guitar, fiddle, mandolin, banjo, drums, and a song or two on the piano. He enjoyed having jam sessions with his friends and dearly loved country music. He was intelligent and knew something about almost everything. His favorite saying was “There are 3 ways of doing things; the right way, the wrong way, and the Glass way. His green thumb included growing banana trees. He was a fabulous storyteller and could amuse anyone for hours/days & never repeat a fascinating tale (most all are true). If he was in the room, there would be lots of laughter. He was determined to keep everyone’s spirits up. He was survived by his wife, Lisa Parham; son, Gary Glass; daughter, Diane White; several grandchildren and great-grandchildren; and niece, Carolyn Burton. He was preceded in death by his parents, Vernon and Ada Glass; Sons, James Michael Glass and Jerry Wayne Glass; sister, Marie Hood Proctor, and special Aunt, Ollie Beecham Pohls. Visitation : will be held Saturday, June 12, 2021 from 10-12:00 p.m. at the Spann Funeral Home Memorial Services: will be held at 12:00 p.m. Saturday, June 12, 2021 at the Spann Funeral Home. Memorials may be made to: The Quest Center (Music Education Center) 202 E. Railroad St. Dickson, TN 37055 615-326-5090

James Delbert Glass was a quirky, eccentric, big-hearted man, who never met a stranger. He passed away on April 18, 2021 from an extended illness at his home surrounded by his family. James D. Glass was born in Dickson on March 16, 1934 to... View Obituary & Service Information

The family of James Delbert Glass created this Life Tributes page to make it easy to share your memories.

Send flowers to the Glass family.