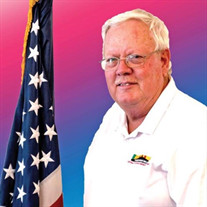 Herschel Leray Luckinbill Age: 75 Of: Charlotte, TN Died: Wednesday, July 28, 2021, at his home in Charlotte. Mr. Luckinbill was born August 2, 1945 in Ardmore, Oklahoma. After high school graduation in Oklahoma, Herschel joined the U.S. Navy, completing boot camp at the Great Lakes Naval Training Center in Illinois, then serving two tours of duty to the shores of Vietnam aboard the USS O’Brien, a destroyer based in Long Beach, California. On December 23, 1966, while operating in the Gulf of Tonkin, the O’Brien received three direct hits from Viet Cong shore battery – the first American ship to receive direct hits from the enemy. Two of Herschel’s shipmates were killed and several others were wounded. While still serving on the O’Brien, Herschel married Eva Davenport whom he met while at Great Lakes. Honorably discharged in December 1967, they came back to Illinois to start civilian life. Herschel became a journeyman sprinkler fitter and went on to become a business owner in that industry before retiring in 2005. During this time, he and Eva raised 3 children and contributed to the community through Jaycees, Oswegoland Pony Baseball, Oswego Youth Tackle Football, and several other organizations. As a young veteran, Herschel received a warm welcome from the local VFW post near his home in Chicago and this set him on a path of service that lasted all of his days. The list of his service and achievements over the years covers numerous contributions to veterans’ causes and initiatives as well as to youth and community organizations. Most significantly, starting in 2005, Herschel served 25 times as a guardian to World War II vets for Honor Flight Chicago. Then took on the role of ambassador and fundraiser – amassing over $100,000 for that group. In 2008 Herschel took on the leadership of the Fox Valley Veterans Breakfast Club. Nurturing and motivating more than 65 area veterans to meet every other week for breakfast and to stay active and engaged in the community. As Herschel states “A busy veteran is usually happy and healthy!!” Retirement also meant more time to reconnect with his former shipmates and get involved in the annual ship’s reunions. Until his death he served as the president of the USS O’Brien Reunion Association and chaired or co-chaired the ship reunions each year since 2009. He was planning the reunion in Oklahoma City, OK this October. In 2013, Herschel sought and received permission to bring the Vietnam Moving Wall to Aurora, IL . Over 200,000 people visited the site to remember and honor the 58,282 casualties of that controversial war. Herschel was honored and recognized by State Representative Kay Hatcher with IL House Resolution # 711 and in June 2014 he was selected by the IL Department of Veteran Affairs to be “Veteran of the Month” for the state of IL. In 2015, Herschel joined a new group formed through the Navy League of Aurora to serve on the commissioning committee for the new USS Illinois 786, a nuclear powered submarine. In 2017 he had the unique pleasure of taking an 11-hour cruise in the sub, off the coast of Florida including underwater dives. In June 2017, Herschel once again was successful in getting approval to bring the Vietnam Moving Wall to our community, this time in Oswego, Illinois. Along with the hard work of more than 700 volunteers, another 175,000 visitors learned about and paid tribute to our fallen heroes from that conflict. Most recently Herschel got the ball rolling on bringing the Mid-East Conflict wall to Oswego, IL. In May of this year. Unfortunately, his health didn’t allow him to travel north to see the fruition of the project. Leading the activities of the Fox Valley Veterans Breakfast Club and planning the USS O’Brien Reunion Association activities took up most of Herschel’s time in recent years. The most rewarding aspect of the work that he did was communicating with fellow veterans - serving as a conduit to connect them to needed resources. In 2019, Herschel was chosen as one of the 200 veteran honorees from Illinois in celebration of the State’s Bicentennial Anniversary. Herschel has often been called “The Veteran’s Veteran”. Herschel and his wife had just recently moved to rural Tennessee to enjoy country life in the home and “He-Shed” they had built. True to his patriotic soul and despite his weakening energy, he took pride in lining his new driveway with over 20 American flags this past Memorial Day. New folks he met would often say- “Oh – you’re the ones that had all the flags in their drive! Beautiful” Herschel has definitely left his mark in the new community, as well Visitation: will be held from 5-7:00 p.m. Monday, August 2, 2021, at the Spann Funeral Home. Graveside Services: for Mr. Luckinbill will be conducted at 9:00 a.m. Tuesday, August 3, 2021, at Middle Tennessee Veterans Cemetery in Pegram, TN.. Interment: Middle Tennessee Veterans Cemetery Survivors include: Wife: Eva Luckinbill of Charlotte, TN Sons: Glenn Luckinbill (Cassandra) of Aurora, IL Brad Luckinbill & Stefani Stack of Yorkville, IL Brothers: Thomas Alvin Luckinbill (Rhonda) of Blanchard, OK Michael Strasner of Ardmore, OK Sisters: Patricia Fuller of Ardmore, OK Grandchildren: Magi Bell-Colfer, Ryan Luckinbill, Brittany Luckinbill Chad Luckinbill, Brandon Hamblen, Billy Hamblen Great Grandson: Noah Berringer Several Nieces & Nephews A Special thank you to Robert & Marlo Davenport Preceded in death by: Parents: Orville & Emma Juanita Hickman Luckinbill Daughter: Lorrie Luckinbill-Hamblen

The family of Herschel Leray Luckinbill created this Life Tributes page to make it easy to share your memories.

Send flowers to the Luckinbill family.