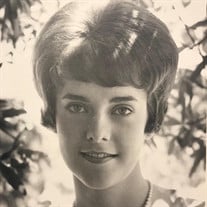 The precious earthly life of Mrs. Gloria Dawn Daniel Herrin of New Johnsonville, TN ended on Wednesday, May 26, 2021, in her home. This wonderful woman was known as many things to many people and was cherished by all. Her favorite name was Mimi, although she always responded with affection to Baby, Mama, Gloria, Glo, and even G. Gloria began her life as the daughter of Vernon Daniel and Audrah Pope Daniel in Fort Payne, Alabama on May 15, 1948, and lived in Geraldine, AL on Sand Mountain with her mom and grandparents while her father served in the Navy. She grew up with fond memories of living with her parents in scenic Alabama, California, Florida, and Tennessee. Gloria began setting the foundational stones for her career in the dental industry while she was still in high school in Savannah, TN. She began her lifelong and happy marriage to Walter Paul Herrin August 26, 1967. Gloria and Walter raised their children, Daniel and Paula, in New Johnsonville, TN where she was active in love and service to our Lord and the people of her community through her church, Hustburg Ebenezer United Methodist Church. In her church life, through Ebenezer, Gloria ministered to so many as a choir director, Sunday school teacher, youth leader, an active member of United Methodist Women, and church office secretary. In her work life, she proudly worked as a registered dental assistant and office manager for Dr. James Powers Dental office in Waverly, TN. In this capacity she continued to nurture those in her community and form lasting relationships with many. Additionally, she was a former President of the Registered Dental Assistants of Tennessee. Later, she served as a consultant bringing her many years of experience to help dentists have successful and quality practices all over the country. While Gloria always excelled in everything she did in both her church and work lives, she took the most enjoyment in her service to her family. She modeled for her family how to love and care for others. She openly welcomed all that came to her home and embraced them into her fold. She loved cooking, sewing, genealogy, reading, and even her fairy garden. Some of her great pleasures were sipping a cup of hot tea, traveling with family, and vacationing at the beach. This treasured, multi-faceted woman will be missed by all that knew her. Her immediate family extends an invitation to her friends and extended family to honor who Gloria was to them and share in a Celebration of Life Ceremony that will take place at Ebenezer United Methodist Church on Monday, June 7, 2021. Visitation will be from 12-2 pm with the service immediately following at 2 pm and officiated by her dear friend, Pastor Donna Parramore. Survivors: Husband of 54 years: Walter P. Herrin of New Johnsonville, TN Son: Daniel L. Herrin (Amy) of Pleasant View, TN Daughter: Paula M. Herrin-Stephens (Shaun) of Camden, TN Sister: Pamela Daniel of New Johnsonville, TN Sister-in-law: Debbie Herrin Grandchildren: Shana Stephens, James Bowden, Megan Bowden, Emily Herrin William Herrin, Alexander Stephens, Luke Stephens Several Nieces and Nephews A Host of Cousins and Extended Family Members Preceded in death by: Parents: Vernon Daniel and Audrah Pope Daniel In lieu of flowers the family asks that memorials be made to Ebenezer United Methodist Church, 8863 Old State Rt. 1, New Johnsonville, TN 37134. Arrangements by Humphreys County Funeral Home (931) 296-5955

The precious earthly life of Mrs. Gloria Dawn Daniel Herrin of New Johnsonville, TN ended on Wednesday, May 26, 2021, in her home. This wonderful woman was known as many things to many people and was cherished by all. Her favorite name... View Obituary & Service Information

The family of Gloria Dawn Daniel Herrin created this Life Tributes page to make it easy to share your memories.

Send flowers to the Herrin family.