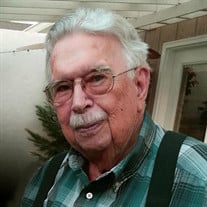 Euell “Dean” Bush, age 90, a longtime resident of Waverly TN, passed away on Saturday, October 17, 2020, at the Good Samaritan Home in Evansville IN. Dean was born on December 18, 1929 in Bradyville TN, to Stephen Bush and Cora Lee (Holt) Bush. He graduated from Woodbury High School, Woodbury TN. He attended Draughon’s Business College in Nashville TN and Elkins Institute in Atlanta GA where he received his First Class FCC Engineering License. Dean briefly served in the United States Marine Corps. He married the love of his life, Mary “Jean” Merideth in 1950. They settled in Waverly TN and started a family. In the 1950’s and early 60’s, Dean worked as a chemist at TVA. He and his father-in-law, Mason Merideth, built and operated Turkey Creek Marina and Resort on Kentucky Lake. Dean is perhaps best known as the long-time radio voice of Humphreys County. In 1963, he became the manager and electrical engineer for Humphreys County’s first radio station. WPHC-AM radio went on the air in 1963, and WVRY-FM radio started broadcasting in 1972. Under his management, the radio stations became vital to the civic and social life of the community, airing local news, high school ball games, and other popular local programming. When the disastrous train derailment and propane tank explosion decimated a large section of downtown Waverly in 1978, Dean had just returned from the site and began writing a news story about the derailment when the explosion occurred. The radio stations aired the evacuation orders as well as messages from the Civil Defense and National Guard. Dean and the station’s news crew stayed on the air simulcasting through both stations for 39 hours straight, covering the train derailment and providing critical bulletins to the community throughout the emergency. Their efforts earned numerous broadcasting awards, including a commendation in the United States Congressional Record. Dean’s voice continues to be aired on WQMV radio to this day. In 1980, Dean was key in establishing the Waverly Cable Television Corporation. After serving as the CEO for ten years, the company was sold to Par Cable Television and Dean began working as the mapping and survey engineer for the Humphreys County Utility District. After retiring from the utility district, Dean opened Antique Village of Waverly on Hwy 70. As owner/operator of a small business, he was able to engage in his lifelong passion for woodworking. At the age of 77 he sold the business and devoted this time of his life to caring for his wife, Jean, until her death in 2012. Dean was a dedicated citizen of Waverly TN and the Humphreys County community. He served on numerous boards and commissions, including the board of directors of the Tennessee Cable Television Broadcasters Association. In the 1960s and 70s, he hosted the “Tennessee Valley Jamboree,” a weekly showcase of local musical talent. Years later, he chaired Waverly’s “Music on the Square” volunteer committee and served as the Master of Ceremonies. He was Vice-President for the Humphreys County Museum Board of Directors and a long-time member of the Rotary Club of Waverly serving two terms as President. He also served as a frequent contributor to the News Democrat with historical articles and imagery. Dean was an accomplished photographer and his photographs appeared in many local and national publications. He served for many years as a Middle Tennessee film correspondent for WTVF Channel 5 News, and the Humphreys County area correspondent/photographer for the Nashville Tennessean. Dean Bush had a bigger-than-life personality. He made friends wherever he went. He could be counted on to liven up a boring meeting with a wisecrack or two. Dean was always ready with a joke, and he never tired of ribbing his golfing buddies and Rotary Club pals. He was proud of his children and grandchildren, and he would do anything for them. He once built a rocket ship that flew across the back yard on a wire cable when his grandson, Stephen, asked for a “real rocket.” For 65 years, he was a faithful member of the Waverly Church of Christ, and he served as a deacon for many years. Preceding him in death are his parents, Steve and Cora Lee Bush, his brother William Bush, sister Nell Jernigan, brother Thomas Bush, and his beloved wife of 62 years, Jean (Merideth) Bush. Dean is survived by his three children, Deana (Ed) Claiborne Dodds, the Executive Director of United Cerebral Palsy of Middle Tennessee in Nashville TN, Douglas (Alice) Bush, the Executive Director of the Indiana Dental Association in Indianapolis IN, and Alan (Randa) Bush, a minister for the Washington Avenue Church of Christ in Evansville IN. Dean has five grandchildren, Stephen (Kelly) Bush of Dayton OH; Merideth (Cameron) Ezell of Indianapolis IN; William (Anna) Bush of Springfield TN; Kalyn (Aaron) Stratton of Jackson TN; and Michael Bush of Evansville IN. Dean also has two precious great-grandchildren Cora Louise Bush and Aveline Marie Bush. In February of 2015, Dean moved to Evansville IN to be near his son, Alan. The family would like to express their appreciation to the health care professionals who provided compassionate and loving care for Dean at the River Pointe Health Campus and the Good Samaritan Home both of Evansville. Due to pandemic restrictions, his family could not be with him during his last days, so his loving nurses surrounded him as he passed away with his Bible in his hand. In lieu of flowers, the family would welcome memorial contributions in Dean’s name to United Cerebral Palsy of Middle Tennessee, 1200 9th Avenue North, Nashville TN 37208. Visitation will be held from 2:30pm until time of services at 3:00pm Saturday, June 12, 2021 at the Waverly Church of Christ. Arrangements by Humphreys County Funeral Home (931) 296-5955

The family of Euell Dean Bush created this Life Tributes page to make it easy to share your memories.

Send flowers to the Bush family.