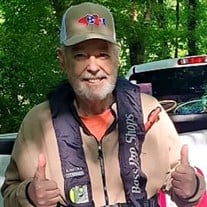 William Wayne Murphy, age 68, of Clarksville, TN passed peacefully in his home October 23, 2021. After graduating from Clarksville High School, Wayne attended APSU where he was a member of the Pi Kappa Alpha fraternity. He married Kay Murphy in July of 1999, blending a family of four boys. Chip Murphy (Christina), Chris Spann (Jess), Matt Spann (Jordyn), and Drew Murphy. Wayne was lovingly known as Papa Bear to 14 grandkids: Tyler, Adyson, Braxtyn, Mason, Lincoln, Cooper, Ryanne, Saylor, Sadie, Madden, Maddi, Henley, Caroline Grace and Tucker. Wayne was the big brother to his loving sister, Annette Murphy Durham (Phil), and an uncle to her children Ross, Katie, and Betsy. Wayne attended Bethlehem United Methodist Church. He was an amazing chef. He was also an avid outdoors man. He loved sharing his passion for sports, fishing, and hunting with his kids and grandchildren. Wayne’s Monday night card group will certainly miss his whit but perhaps not miss losing their pennies to him. Wayne was preceded in death by his parents, William B. Murphy and Anne Hargrove Murphy. Wayne’s final wishes were to be honored in a private lakeside service. In lieu of flowers, the family asks that donations be made to support "Hunt of A Lifetime”, who helps grant hunting and fishing dreams of children who have been diagnosed with life threatening illnesses or life-threatening disabilities.

The family of William Wayne Murphy created this Life Tributes page to make it easy to share your memories.

Send flowers to the Murphy family.