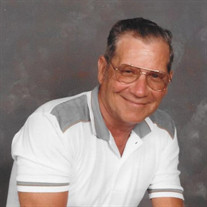 Mr. Thomas Earl Winters, age: 90 Of: New Johnsonville, TN Died: Tuesday, February 9, 2021 at his home. He was born August 22, 1930 in Humphreys County. Mr. Winters was an Army Veteran who served during the Korean Conflict. He... View Obituary & Service Information

The family of Thomas Earl Winters created this Life Tributes page to make it easy to share your memories.

Send flowers to the Winters family.