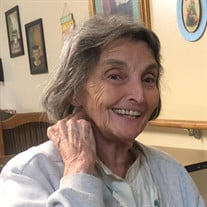 Ms. Mary Jo Watkins Wells, age 85, of McEwen, TN passed away Wednesday, November 4, 2020. She was born on November 2, 1935 at Hurricane Creek to Andrew Taft Watkins and Audrey Mai Tummins. Mary Jo was the second child of 5 children: her older sister Virginia Anne, and her older brother Jim and younger twins Larry and Jerry. She grew up on Hurricane Creek, fortunate to have strong parents and extended family. Anyone who knew her was aware of her beautiful smile and her quick temper. She was well known as someone who vigorously sought to remedy perceived slights knowing full well there would be a whipping when she got home. She came by her disposition honestly; she was cut from her momma’s cloth. This trait remained with her throughout her life, willingly taking on several if she took slight or someone threatened her family. She married herself a soldier, James Willie Wells on the 17th of January 1953 and this little girl from Hurricane Creek became a world traveler. She began traveling across the United States and Europe with Willie and their 2 sons, Wayne and Mark. During her travels Mary Jo waited tables, worked as a telephone operator, modeled clothes while at Vicenza Italy, visited Lago di Gardia often with friends and family, and was “adopted” by local Italian families as one of their own. Her dark hair, natural beauty, and fiery temperament melded well with the Italian locals much to chagrin of Army officials at the local base. She walked the snowy winter passes in Bavaria Germany, visited Neuschwanstein Castle Schwangau Germany, raised a toast in Münich, but never felt more at home than she had in Italy. She returned to the States and started her own business, a successful figure salon in Fayetteville, NC, just one of many businesses that would follow. She loved her family fiercely and when her Daddy was injured in a train crash she came home to Tennessee. She gave care to her mother, Audrey Mai and gradually slowed down in business dealings and life as she aged. When Willie retired from the US Army they moved to Dickson and he started his second career with L&N. She was still looking for adventure and added flying to her personal resumé. She never lost her fire; even frail and weak her eyes would sparkle, and she would lash out at those who did her wrong. She lived a life full of adventures, on her own terms and suffered no fools. She was loved by many and will be loved as long as we tell her stories and keep her in our hearts. *Due to the rising concern regarding Covid-19, the family has elected to have a graveside service only. Masks are strongly recommended for those who will be attending the service.* Graveside Services for Ms. Wells will be conducted at 1:00pm Saturday, November 7, 2020 in Fews Chapel Cemetery in McEwen with William Brown officiating. Interment will follow. She is survived by her first born sister Virginia Anne Murrell and her husband Ray, her younger brother Larry Dean Watkins and her oldest son James Wayne Wells and his wife Diana Lynn Wells, as well as nieces Audrey Miliken, Michele Watkins, Sherree Watkins, Lisa, Laurie VanAssche, Andrea Morris, Sandra Workman, Molly Watkins and nephews Roger and Ronnie Murrell. Arrangements by Humphreys County Funeral Home (931) 296-5955

The family of Mary Jo Wells created this Life Tributes page to make it easy to share your memories.

Send flowers to the Wells family.