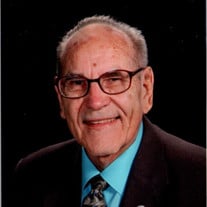 Kenneth Randall “Ken” Davis, 86 years of age, of Dickson, TN, went to his Heavenly Home on February 9, 2021, at Horizon Medical Center. Ken was born January 6, 1935 and raised in Nashville. He joined the military in 1954. He was proud to serve his country in the U.S. Air Force. In 1960 he was stationed at Forbes Air Force Base in Topeka, KS, where he met, fell in love, and married Joyce Williams in 1965. Ken & Joyce were stationed at several Air Force bases over the years before he retired, in 1977, as a Master Sergeant after 23 ½ years of service to our country. During that time, they were blessed with 2 daughters, Amy and Julie, who were the light of his life. While stationed overseas, he helped with several mission churches in Thailand and Japan. After retirement, he worked several years for Prime Computers and retired a second time in 1992. Ken & Joyce retired to Tennessee in 1977, where he loved spending time with his family and friends, watching NASCAR racing, cheering for TN Vols football, putting model airplanes together, sitting on the front porch watching his Purple Martin birds, & going camping in his camper. He loved the Lord & was very active in First Baptist Church Dickson, where he taught children’s Sunday School classes & led the Senior XYZ group for many years. He was the church bus driver for the Senior’s trips, and he also drove for many of the youth Mission trips & adventures. He had wonderful times with all his Christian friends at First Baptist. He was also a member of the American Legion. He loved to joke and cut up and always kept everyone laughing and smiling. He will be missed by all who knew him. He is preceded in death by his parents, Jesse and Eleanora Buck Davis; Joyce’s parents, Marion and Freda Williams; his brother, Billy Glover; his Sister-in-laws, Margaret Williams Patterson and Frances Davis, and Brother-in-law, Joe Link. He is survived by his loving wife, Joyce, of 56 wonderful years together; his daughters, Amy and Julie; his siblings, Norman Davis Sr., Darlene Davis Link, Jacky Ray (Dollie) Davis, Leroy (Cindy) Davis, and Leon (Reatha) Davis; and his Brother-in-laws Robert (Iris June) Williams, and Pat (Barbara) Patterson; and several nieces & nephews. In lieu of flowers, memorials may be made to the Frist Baptist Church of Dickson 2501 Hwy 70 East, Dickson, TN, or the Dickson County Help Center 103 West College Street, Dickson, TN. Family will receive friends for visitation on March 2, 2021 at First Baptist Church Dickson, TN from 10:00 AM to 12: 00 PM, with funeral service to begin at 12:00 PM. The family asks for masks to be worn & social distancing. The service will be streamed live for those not able to attend on Spann Funeral Home's Website & Facebook. Website: https://www.spannfuneralhome.com/resources/live-stream-services Facebook: www.facebook.com/spann.funeralhome It will be posted to be watched later as well. Following the service, Ken will be buried with honors in the Middle TN State Veterans Cemetery.

The family of Kenneth "Ken" Randall Davis created this Life Tributes page to make it easy to share your memories.