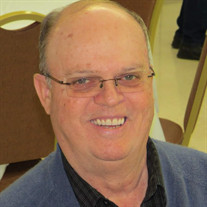 ANNOUNCEMENT Kenneth L. Eutsler passed away peacefully due to complications related to an aggressive lung cancer that was recently discovered after he was admitted for emergency medical treatment related to contracting COVID-19. He entered triumphantly into the everlasting presence of our Lord and Savior, Christ Jesus, while at home in Burns, TN, in the company of his beloved wife and family on September 20, 2020. HISTORY & PERSONAL INFORMATION Kenneth (Ken) Eutsler, the man who was to become known as one of the world’s greatest Husbands, Fathers, and Grandpas was born in Mount Vernon, Illinois on April 2nd, 1948, to Dorothy and William (Bill) Eutsler. He was preceded in death by both of his parents as well as his older brother, Jim Crabtree, and survived by his younger siblings John Eutsler and Meri (Eutsler) Curtis. On this side of heaven’s veil, Ken is temporarily departing from the love of his life, Wanda D. Eutsler, with whom he recently celebrated his 50th wedding anniversary on March 28th, 2020. Ken and Wanda met in Orlando, Florida while he was serving as a Staff Sergeant in the USAF and she was working in her first position as a public school teacher. They were married at Southside Baptist Church in Troy, Alabama, and their marriage was quite an adventure, to say the least. Over the years, Ken’s professional career path led them to live in FL, AL, CO, TN, MI, IL, MD, and even a summer in Canada—a grand total of almost 20 moves! Ultimately, they retired to Burns, TN in November of 2007 so they could remain in close proximity to all of their children and grandchildren. Ken is also survived by his three sons, Christopher, Richard, and Daniel, and six adorable grandchildren who he loved beyond measure: Kaitlin and Braden (Christopher’s children), Ethelia and Kaldan (Richard’s children), and Gavin and Anna Rose (Daniel’s children). He is also survived by a loving and supportive daughter-in-law, Kathleen Eutsler (Daniel’s wife), who he has always considered to be a daughter of his very own. Ken’s faith in Christ Jesus came first and foremost throughout his life. He was 7 years old when, at a tiny Southern Baptist church that was meeting in a Bunny Bread factory in Anna, IL, he made a personal profession of faith in Christ Jesus as his Lord and Savior, and he was baptized shortly thereafter. Over the years, he has been heavily involved in many forms of Christian ministry: singing in church choirs, serving as a deacon, working alongside other Campers on Mission, and leading within The Gideons International, whose Bible distribution ministries have touched millions of lives around the world. At the time of Ken’s passing, he was serving as the Dickson County Camp Chaplain for The Gideons International. In addition to all of this, Ken had a special sense of calling to serve the widows within his local church communities and beyond, and he also volunteered to serve at the Dickson County Help Center for over 5 years. Over the course of his life, Ken found that one of the most beautiful things about following Jesus was that, no matter where his worldly travels took him and his family, there was always an extended family to be found immediately through Christian church fellowship…“forever friends” who were always there to help each other to walk the mile and share the load. Most recently, Ken found that Christian fellowship as a member at First Baptist Church in Dickson, TN. The love, friendship, and Christian kinship that he and Wanda have found at First Baptist Church, Dickson, are among the greatest he has ever known, and he will be at peace in the knowledge that this fellowship of true believers will continue to support his beloved wife and family in his absence, as if unto the Lord. Truly, Ken’s life was greater than the sum total of all its many parts, and that fact is entirely attributed to the Holy Spirit of God abiding with Ken, guiding, and directing him throughout his life’s journey. It would be among Ken’s greatest hopes that his testimony might help to lead lost souls to accept God’s gift of salvation that was won forevermore at Calvary, and for those who already profess Christian faith to commit to a closer walk with the Lord! “Even though the day be laden and my task dreary and my strength small, a song keeps singing in my heart! For I know that I am Thine. I am part of Thee. Thou art kin to me, and all my times—all my times—are in Thy hands.” ~~The Northumbria Community, from “Celtic Daily Prayer” In lieu of floral arrangements, the family asks that any memorial gifts be made solely to The Gideons International or to First Baptist Church of Dickson, TN. God’s peace and blessings be upon you, in the name of Christ Jesus.

ANNOUNCEMENT Kenneth L. Eutsler passed away peacefully due to complications related to an aggressive lung cancer that was recently discovered after he was admitted for emergency medical treatment related to contracting COVID-19. He entered triumphantly... View Obituary & Service Information

The family of Kenneth L. Eutsler created this Life Tributes page to make it easy to share your memories.

ANNOUNCEMENT
Kenneth L. Eutsler passed away peacefully due to...

Send flowers to the Eutsler family.