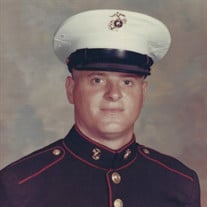 Mr. Joseph Robert “Joe Bob” Comuzie, age 74, of Waverly, TN passed away Friday, April 22, 2022 at Three Rivers Hospital in Waverly, TN. Joe was born on May 9, 1947, in United, WV. He lived in Waverly, TN for the past 30 years. Joe served in the United States Marine Corps and served two tours in Vietnam. After being honorably discharged from the Marine Corps., he worked and retired from the railroad after more than 30 years of service. Per Joe’s wishes there will be no services. He will be cremated and interred privately at a later date. In lieu of flowers the family requests that you donate to a veteran association of your choice. Joe was preceded in death by his parents, Joe Maxwell Comuzie and Doris Bradford Comuzie of Shallotte, NC; sister and brother-in-law, Sharon (David) Carte of Shallotte, NC; and sister, Margaret Lovejoy of Charleston, WV. He is survived by his wife, Kathy Roberts Comuzie of Waverly, TN; sons, Kevin Comuzie of Plano, TX, Bob (Sarah) Comuzie of Camden, TN, and Danny Comuzie of Waverly, TN; grandchildren, Emma Comuzie, Livia Comuzie and Konner Comuzie, all of Camden, TN, and Calista Hollowell of Waverly, TN; brothers, Donald Comuzie of Charleston, WV, Tommy Comuzie of Shallotte, NC and James Comuzie of Campbells Creek, WV; and sister, Toni Burdette of Charleston, WV. Arrangements by Humphreys County Funeral Home (931) 296-5955

The family of Joseph Robert "Joe Bob" Comuzie created this Life Tributes page to make it easy to share your memories.

Send flowers to the Comuzie family.