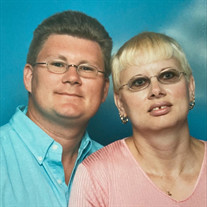 Gary Lee Raymond, age 53, of Dickson, Tennessee, left this world January 13th, 2022. He passed away in his home, with his dog, Puddles, and niece, Wendi by his side. Gary was born in Rutland, Vermont on August 14th, 1968. He grew up and attended school in Warrensburg, New York. He and his brother David worked for their father building homes for many years, as Raymond & Sons. In his early twenties, Gary discovered his love for the open road, and transitioned to a career in logistics. He met the love of his life when she moved into a rental unit owned by his parents. Gary and Winnifred were married on August 5th, 2001. Shortly after, they relocated to Dickson, Tennessee. Gary found employment with Huson Leasing Construction Equipment Transport. Gary and Winnifred lived simply and loved deeply. They loved dining out, listening to live music, and seeing off-the-beaten-path destinations. Gary lost his beloved wife to cancer in 2014. He kept their love alive for the rest of his days, always holding her memory close. Gary was a Godly man and later in life became a member of the Dickson Ward of the Church of Jesus Christ of Latter-Day Saints. Gary was a kind, generous, loving, man who could make friends out of a stranger within minutes. He touched the lives of everyone he knew with his soft heart and outrageous humor. Gary didn’t care if you were homeless or a millionaire, he treated everyone with compassion and would give the shirt from his back. He worked hard, loved hard, and lived life to the fullest. Gary is survived by his father, Richard Lawrence Raymond, his sisters, Carol Ann Raymond and Peggy Lynn Mitchell, his brother, David Anthony Raymond, his niece Wendi Lynn Hammann, nephews, Kenneth Sylester Hammann IV, and Christopher Hans Hammann, and his loyal dog, Puddles and cat, Pepper. Gary is predeceased by his mother, Victoria Janet Wento Raymond, and has been reunited in death with his adoring wife, Winnifred Ann Raymond. There will be a memorial service held on March 27th, 2022, at 11am, at his home. Anyone who knew Gary is welcome. Do not go gentle into that good night, Old age should burn and rave at close of day; Rage, rage against the dying of the light. Though wise men at their end know dark is right, Because their words had forked no lightning they Do not go gentle into that good night. Good men, the last wave by, crying how bright Their frail deeds might have danced in a green bay, Rage, rage against the dying of the light. Wild men who caught and sang the sun in flight, And learn, too late, they grieved it on its way, Do not go gentle into that good night. Grave men, near death, who see with blinding sight Blind eyes could blaze like meteors and be gay, Rage, rage against the dying of the light. And you, my father, there on the sad height, Curse, bless, me now with your fierce tears, I pray. Do not go gentle into that good night. Rage, rage against the dying of the light. - Dylan Thomas

Gary Lee Raymond, age 53, of Dickson, Tennessee, left this world January 13th, 2022. He passed away in his home, with his dog, Puddles, and niece, Wendi by his side. Gary was born in Rutland, Vermont on August 14th, 1968. He grew up and attended... View Obituary & Service Information

The family of Gary Lee Raymond created this Life Tributes page to make it easy to share your memories.

Send flowers to the Raymond family.