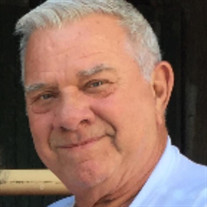 Mr. Carl Ray McMullen, age: 77 Of: Waverly, TN Died: Saturday, May 8, 2021 at his home surrounded by his wife and three daughters. He was born February 25, 1944 in Tuscarawas County, OH. He was the son of the late Cyril R. and Louella A. McMullen. Carl grew up on the family farm in Gilmore, OH and started helping out at an early age. He was a graduate of Port Washington High School Class of 1962. He then attended and graduated from David Lipscomb College with a degree in Chemistry and Physics. On August 20, 1967, Carl married Anna Faye Oakley from Waverly, TN. They were married for 53 years. He was a member of the Waverly Church of Christ. Throughout his life, Carl was employed as a schoolteacher teaching Chemistry and Physics, worked at General Telephone as a Chemical Engineer, and was a metallurgist at United Foundries. He later founded his own company, Foundry Technology, and held several patents. He worked at Floied Gauge Machine and became manager at Burns Gauge. Later he was employed at Humphreys County Propane and Lindsey Propane. Even after retirement he continued to have various part time jobs throughout the remainder of his life. Carl was an optimistic, happy go lucky man who enjoyed time spent talking and laughing with friends. He was considered old school and had the rare ability to fix or build anything. He was able to do mechanical work, plumbing, electrical and automotive repairs, or think up a way to fix anything. Carl had a great love for gardening, canning, cooking, hunting, and inventing. His greatest joys were his family, riding his tractor, bush hogging, and his family farm in Ohio. Mr. McMullen’s wishes were to be cremated. A memorial service will be held at a future date in Gilmore, OH on the family farm. Survivors: Wife of 53 years: Anna Faye Oakley McMullen of Waverly, TN Daughters: Sarah Elizabeth Thornton (David) of Nashville, TN Anna Laura Tummins (Seth) of Waverly, TN Rachel Rebecca Jones (Adrian) of Jackson, TN Brother: Glenn McMullen (Margie) of Port Washington, OH Sister: Faye Welsch (Bob) of Port Washington, OH Grandchildren: Joseph, Isaac, and Thomas Jones Niece & Nephew: Lisa Parise (Ralph) of Stow, OH Craig Welsch of Port Washington, OH Several Beloved Cousins Preceded in death by: Parents: Cyril Ruskin McMullen and Louella Appeline Lanning McMullen Sister: Martha Jean Main Arrangements by Humphreys County Funeral Home, (931) 296-5955

Mr. Carl Ray McMullen, age: 77 Of: Waverly, TN Died: Saturday, May 8, 2021 at his home surrounded by his wife and three daughters. He was born February 25, 1944 in Tuscarawas County, OH. He was the son of the late Cyril R. and Louella... View Obituary & Service Information

The family of Carl Ray McMullen created this Life Tributes page to make it easy to share your memories.

Send flowers to the McMullen family.