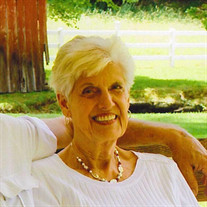 Jeanelle Vestal’s journey began 85 years ago and ended Monday, November 23, 2020. A resident of Dickson County since 1975, Jeanelle, the third of four children, was born on June 7, 1935 in Barnesville, Georgia. Jeanelle was married to Joe Vestal for 54 years, until he passed away in 2014. Jeanelle is survived by; her son and daughter-in-law, Lee and Renee’ Vestal of Dickson; daughter and son-in-law, Kam and Rick Congleton of Ocean Ridge, Florida; son and daughter-in-law, Jeff and Jill Vestal of Marietta, Georgia; and brother and sister-in-law, Dave and Beth Torbert of Barnesville, Georgia. Jeanelle enjoyed sharing in the lives of her five grandchildren and one great grandchild. Jeanelle was raised in a home with no running water and clearly remembered the year electricity “came down the road” to their part of the county. She “skipped ahead one year” when the one room schoolhouse she was attending closed and the students were sent to Milner. There were only eleven grades at that time and she would have graduated at 16 years old but, because of her outstanding basketball skills, Coach Studstill and the principal devised enough “business” courses to keep her enrolled as a full time student eligible to play ball. During her last year of school, Jeanelle was recruited by the Atlanta Tomboys, a semi-pro fast pitch softball team. She graduated from Milner High School in 1952 and moved to Atlanta to begin her pitching career. In the off seasons, Jeanelle was also a member of the Tomboys basketball team. Jeanelle met Joe in Atlanta. The story goes he asked her for a date the first time he laid eyes on her but she didn’t think he was old enough to date her and made him show his driver’s license to prove his age. After that rocky start, things could only get better, which they did. The couple were married on August 22, 1959 and their first (and wisest) child showed up a few years later in 1962. The family grew to three children and Joe’s career took them from city to city, even state to state, until they finally landed in Dickson, TN in December 1975 where the family put down roots. Jeanelle was a very independent, spiritual, sports loving lady who never met a stranger. No matter which city or state they were living in, she had her children in church every time the doors were open until they were grown and raising children of their own. She served as Vacation Bible School Director for several years and also taught Sunday School for more than 20 years, until dementia stole her ability to concentrate. Her love of sports continued and once the nest was empty, she was known to “skip the preaching” after Sunday School was over if the Lady Commodores had a home game that afternoon. After all, you couldn’t waste that season ticket, could you? Jeanelle was so friendly and outgoing, she took the opportunity to introduce herself to Pat Head Summit during a basketball tournament and to Dolly Parton, Porter Wagner, and other country music stars back when Fan Fair was a “new” thing held at the Nashville Fair Grounds. She was so independent she flew to and from Europe solo when her daughter was stationed in Germany so they could do a little sight-seeing. She loved visiting Paris, France and seeing the Louvre Museum and Eiffel Tower. Above all she was courageous and full of grace. As dementia progressively intruded into her life, Jeanelle never faltered or complained. Her last day on this earth was spent receiving comfort care in the presence of those she loved and who loved her. She already has on her new body, perfected & pain free. She also has all of her mental capacity back and is no longer confused or scared. In fact, she sees things now more clearly than us and understands the answers to questions that are still mysteries to us. Jeanelle’s children do not want to put anyone at risk and will lay her to rest privately in Mt. Zion Cemetery, Barnesville, Georgia with her parents, elder brother, and sister on November 28, 2020. Celebrations of her life will be held in Dickson and Barnesville after this pandemic is under control, in the Spring of 2021. As there is no need for flowers, the family requests that donations be considered for Mallory’s Miracle Children’s Charity (http://mallorysmiracle.com/mission-statement/ )

Jeanelle Vestal&#8217;s journey began 85 years ago and ended Monday, November 23, 2020. A resident of Dickson County since 1975, Jeanelle, the third of four children, was born on June 7, 1935 in Barnesville, Georgia. Jeanelle was married to... View Obituary & Service Information

The family of Jeanelle Vestal created this Life Tributes page to make it easy to share your memories.

Send flowers to the Vestal family.