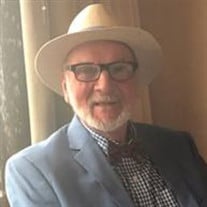 Gary Leon Henard, age 76, of Waverly, TN passed away of natural causes Sunday, November 21, 2021 at Tennova Healthcare in Clarksville, TN. Gary was born June 26, 1945 in Little Rock Arkansas, to the late Richard Archibald Henard and Ina Inez Venable Stephenson. He attended North Little Rock High School and joined the US Army. He served in Korea from 1967 to 1971. After returning home from Korea, he moved to Los Angeles, CA. Gary got his CDL and started driving a truck as a cross country mover for over 40 years. After he married, Gary lived in Loma Linda, California, and later moved to Waverly, Tennessee, in the winter of 1979, where he spent the rest of his life. Gary enjoyed driving as an independent owner/operator and had several semi-trucks over the years. Gary and his kids worked on classic cars, and he owned a 1957 Chevy as well as a 1972 Ford Bronco. He was involved with his kid’s Baseball and Football sports teams. The entire family shared the love of fishing, hunting, sports, racehorses and playing cards together. Gary had a great sense of humor and could make anyone laugh. He had a rhyme or song, and little ditties for everyone. He loved Western movies, Country music and dancing. He loved sports and was an avid hunter/fisherman. He enjoyed the outdoors and was always ready to share his knowledge with others. Gary was a mentor to many and had kids, grandkids, nieces, and nephews that weren’t blood family. He made everyone feel welcome. He brought people together and made everyone have a sense of belonging. His proudest achievement was his family. Gary was married to MaryAnn Henard for 27 years and has 4 kids and 11 grandkids. Hayley Henard Reagin, husband Mark Reagin, and children Noah, Noelle, Collin, Carly Reagin Zach Henard and sons Aiden & Baker Allen Leslie Henard Leon, husband Gerard Leon, and children Lucas, Benjamin, Nicolas, Samuel Leon Chris Henard and daughter Caroline Henard Gary is survived by his longtime friend and companion Jewel Warden, her children and grandchildren that he loved as his own. His big brother, Wayne Henard. Gary’s sisters, Luis and Linda, were identical twins, and three sets of his grandsons are twins. Nieces-Janice Kay Henard, Misty Henard, Cathy Mahan Middleton, Rhonda Dailey, Linda Faye Mahan Davis, Andrea Cross Nephews-Wayne Henard, Tracy Henard, Kevin Henard, Eddie Mahan, David Mahan, Shane Cross He is also survived by numerous friends from all over the country. Visitation will be held at Humphreys County Funeral Home, Waverly, Tennessee on Wednesday, November 24, 2021, 4:00 – 8:00PM. Casual Attire, shared memories 7:00 – 8:00PM. Visitation in Arkansas will be held from 5:00 – 8:00pm on Tuesday, November 30, 2021 at A Natural State Funeral Service, 2620 West Main Street, Jacksonville, Arkansas, 72076. Funeral Services for Mr. Henard will be conducted at 10:00am Wednesday, December 1, 2021 in A Natural State Funeral Service’s Chapel. Burial Service will follow at the North Little Rock Arkansas Veterans Cemetery at Noon. Arrangements by Humphreys County Funeral Home (931) 296-5955
To order memorial trees in memory of Gary Leon Henard, please visit our tree store.