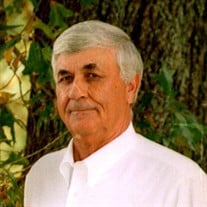 Billy Tip Heath Age: 81 Of: Charlotte, TN Passed away peacefully at his home surrounded by his family and friends on May 25, 2021 Visitation: will be held Friday, May 28, 2021 from 2-7:00 p.m. and Saturday, May 29, 2021 from 10-2:00 p.m. at the Spann Funeral Home. Funeral Services: for Mr. Heath will be conducted at 2:00 p.m. Saturday, May 29, 2021 from the Chapel of the Spann Funeral Home with Bro. Gary Herndon officiating. Internment: will follow in the Greenwood Cemetery Billy Tip was born to Jim and Idell Heath on May 1, 1940 in Charlotte, Tennessee. He was a graduate of Charlotte High School in 1958 and served his country proudly as a member of the United States Air Force. After his service in the Air Force, Billy returned to Charlotte and worked for Sessions paving company for Fifty-Four years, where he retired as a superintendent in 2016. He was an active member and deacon of the First Baptist Church of Charlotte. Billy Tip is survived by his wife of 59 years Joyce Heath. Son, Christopher Heath of Charlotte, TN, Daughters, Kim Lane (Johnny) of Pegram, TN, Renee Lankford (Kerry) of Dickson, TN. Grandsons, Brian Threet (April) of White Bluff, TN, Heath Foster (Nicole) of Boston, MA, John Wade Davis (Trina) of Dickson, TN, Hunter Threet (Britney) of Nashville, TN, and John Lane (Blakeslee) of Nashville, TN. He is also survived by his great-grandchildren Lily Lane, Kyndall and Landon Threet, Jase Wade Davis, and Sage Gendreau as well as several nieces and nephews and his three sisters, Sue Zwingle (Bob), Laura Story, and Betty Fizer (Joe) all of Charlotte, TN. The family would like to extend a special thank you to Caris Hospice for the care and comfort that it provided to Billy Tip at the end of his life. The family also greatly appreciates the prayers and support that it has received from several friends and family members in the Charlotte Community.
To order memorial trees in memory of Billy Tip Heath, please visit our tree store.