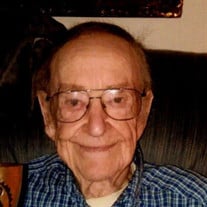 Albert Thomas Cook Age: 95 Of: New Johnsonville, TN Died: Friday, April 23, 2021 at Three Rivers Hospital in Waverly, TN. He was born on February 01, 1926 in Universal, Indiana. Mr. Cook served in the United States Army Air Corps and was proud of his service to his country. In addition to being proud of his service to his country, he was also proud to be a part of the beginnings of DuPont in New Johnsonville, TN. He was passionate about football and supporting his Tennessee Titans. In his youth he played semi-professional football in Indiana. Albert was a loving and good man, he enjoyed spending time with his family. He was a history buff and enjoyed using his artistic abilities to draw. His family will always remember him as the “Post-It Note King”, and the supervisor of all their activities. Visitation will be held from 10:00 AM – until time of services on Wednesday, April 28, 2021 at Humphreys County Funeral Home. Funeral Services for will begin at 1:00 PM on Wednesday, April 28, 2021 from the Chapel of Humphreys County Funeral Home. Interment will follow in the New Johnsonville United Methodist Church Cemetery. Survivors: Wife of 71 years: Marion May Cook of New Johnsonville, TN Sons: Robert “Bob” Cook (Fay) of Millbrook, AL Thomas “Tom” Cook of New Johnsonville, TN Daughter: Alicia Ann Cook Mitchell of New Johnsonville, TN Grandchildren: Robert, Nicholas, Albert, Amanda, Thomas, Michael, Matthew, and Krissy 11 Great Grandchildren 2 Great Great Grandchildren Preceded in death by: Parents: Albert R. and Jenny Ann Granger Cook Grandparents: Thomas and Margaret Granger In lieu of flowers the family asks that donation be made in memory of Albert to St. Jude’s Children’s Hospital. Arrangements by Humphreys County Funeral Home (931) 296-5955
To order memorial trees in memory of Albert Thomas Cook, please visit our tree store.